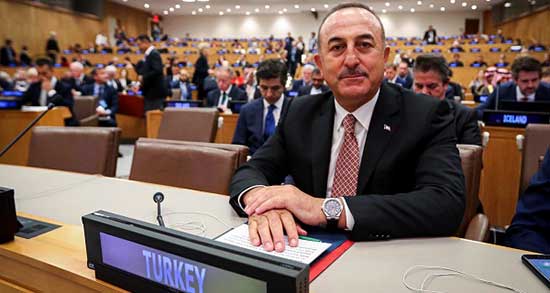 “We request Bangladesh to allocate land. If Bangladesh can do that, we are ready to build proper camps for these vulnerable people as we did for Syrian refugees in Turkey, which are the best camps in the world,” said Cavusoglu.

Malaysian Prime Minister Dr Mahathir Mohamad reiterated at the same side event that Burma should demonstrate it was serious in alleviating the Rohingya crisis, saying repatriation should be the main priority.

“Two attempts have been made to repatriate some of the refugees,” said Dr. Mahathir. “Both have failed. Reasons for this are obvious. No one would return if they do not feel that their safety is guaranteed. On this, Malaysia will continue to insist that repatriation be done in a safe, voluntary and dignified manner.”

“This can only be done by granting full citizenship to the Rohingyas. However, the Myanmar authorities have manipulated the Rohingya issue to incite fear, hatred and violence. Thus, merely considering the idea of granting citizenship is unacceptable,” he said.

Dr. Mahathir slammed the Burmese government, led by Nobel Peace Prize laureate Aung San Suu Kyi, for being unwilling to take any action to “resolve the crisis” and the United Nations for its “deafening” silence.

The Prime Minister also praised the Organisation of Islamic Cooperation (OIC) for attempting to seek legal redress for the stateless Rohingya through the International Court of Justice, saying that other countries should support the OIC “to ensure that the perpetrators do not get away with the heinous crimes they have committed”.

“It is left up to us – the international community — to do something about the situation. For a start, the UN should play its role, taking into account that it was established in the hope of preventing future human-made miseries … Without Security Council action, others must do their part to resolve the crisis and bring perpetrators to justice,” Dr. Mahathir said.

“The Myanmar authorities have denied access to some UN officials and humanitarian aid workers. If Myanmar has nothing to hide, why bar others from seeing the situation in Rakhine? Let these officials and aid workers visit, inspect and assist those living in the camps,” he added.

The Malaysian Prime Minister said it was obvious that Myanmar’s attempt at ensuring accountability had failed. “How would such attempts work if the perpetrators responsible for the atrocities are part of the system? As it is, none of the atrocities committed in 2017 have been accounted for. Even those convicted for the Inn Din mass killings (in 2017), were released after serving barely one year of their 10-year sentence.”

“The conviction was an attempt to deceive us into thinking that they are holding perpetrators accountable. Seven soldiers were sentenced to 10 years’ jail in 2018 for killing 10 Rohingya Muslim men and boys in Inn Dinn village the year before. However, all were released in November 2018,” he said

Dr Mahathir said that Malaysia has tried to do all it could for the Rohingyas. Apart from rendering humanitarian assistance, Malaysia is operating a field hospital in Cox’s Bazar, Bangladesh.

“We are also hosting close to 100,000 registered Rohingya refugees,” said Dr. Mahathir. “There are many more unregistered. While this may seem like a small number compared to those in Bangladesh, plenty of resources have been dedicated to allow them a decent life while they await relocation to a third country. We will continue to help the Rohingyas within our means and capacity.”

The Turkish Foreign Minister said that the Rohingya crisis was one of the gravest tragedies in the world.

More than 750,000 Rohingya refugees, mostly women and children, have fled Burma and crossed into Bangladesh after Myanmar forces launched a crackdown on the minority Muslim community in August 2017.

The Rohingya are described by the UN as the world’s most persecuted people.