Australia Rohingya communities from Queensland and Sydney demonstrated for Rohingyas and Bangladeshi boatpeople who are floating and stranded in sea on May 22 at evening, according to Burmese Rohingya Association in Queensland Australia (BRAQA) information desk.

The Australia Rohingya communities – BRAQA and Queensland Rohingya Community (QRC) based in Brisbane, Queensland joined the demonstration which was organized by Queensland based humanitarian organization -Refugee Action Collective-RAC and Burmese Rohingya Community in Australia (BRCA) and Australia Burmese Rohingya Association based in Sydney, also joined the demonstration, organized by Socialist Alliance and Refugee Action Collation, according to their websites. 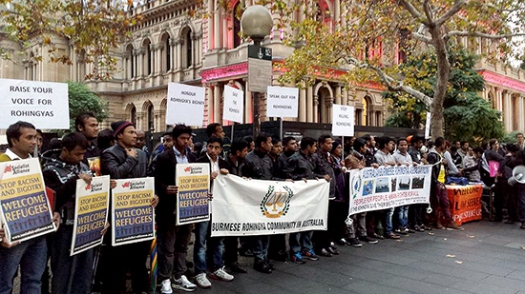 Greens Upper House member Mehreen Faruqi, the first Australian Muslim woman to be elected to parliament was speaking at Rohingya refugee rally in Sydney. Rain fell & tears shed in crowd. Compassionate plea for the Rohingya: Our lives are ending without safety and security. Tony Abbott & Bill Shorten are you listening? Rohingya people have no choice but to flee for their lives. We must provide safety. Refugees are welcome here! Rescue the Rohingya. Let them land. Let them stay, according to her twitter page.

Both the speakers from Rohingya had described the atrocities and persecutions committed against Rohingyas internally and externally as terrifying, bestial and humanitarian disaster. They also asked for UN intervention and to put  pressure on Burmese government to stop persecutions on Rohingya Muslim.

Salim Mohammed – BRQA member and Medical student- expressed “It is very hard to concentrate on my studies seeing all my brothers and sisters all over the world being treated ruthlessly. They are being treated wore than animal. I can feel for my Rohingya brothers and sisters who are crying for safety and to save their lives.  I pray for this ruthless situation has to be ended. Please, please and please Mr. Tony Abbott -Australian Prime minister- to mercy upon Rohingyas.” 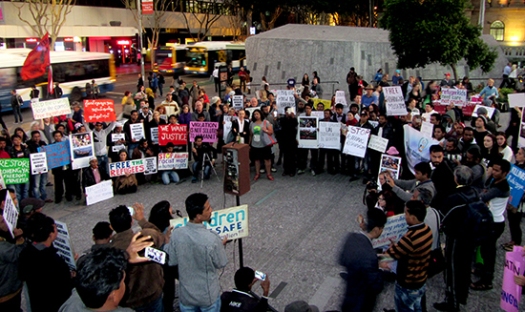 “I can feel those Rohingya who have died in the sea. I can feel the cry of men and women and children – the children who cry every day for their father. I cried for my father. But they can do nothing. It is hopeless. They cannot do anything — the women need their husbands but they don’t have anyone from whom to get love. They can’t move from one village to another village. There are restrictions on education. Few of us can speak English. Few of us have the opportunity to get an education. Our lives are ending without feeling, the security of another country’s people with citizenship or permanent residency or something with which they can feel they are secure; but, if they are missing, they have someone who can ask ‘where is my brother?’; they have a police station, they have something that is secure for them – but we don’t have anyone”, said a Rohingya on the rally at Sydney.