Teknaf, Bangladesh: Three alleged human traffickers were killed in a gunfight with police in a shrimp enclosure under Teknaf police station on May 8, at about 3:30am, Ataur Rahman Khandakar, officer-in-charge of Teknaf Police Station said. 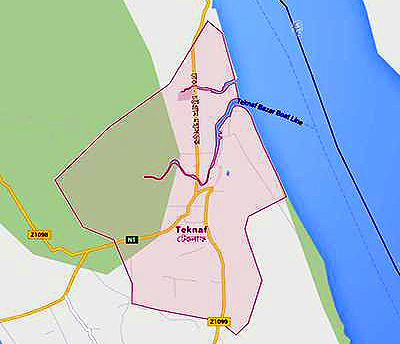 The traffickers were suspected of smuggling thousands of Bangladeshi and Burmese nationals across rough seas to Malaysia and Thailand. The raid followed the discovery of mass migrant graves and a network of secret jungle camps by human trafficker in at Padang Besar sub-district of Songkhla’s Sadao in southern Thailand Thailand`s deep south, the officer said.

Acting on a tip-off, police launched a drive in Hatchery Beach area of Teknaf when a group of human traffickers were attempting to traffic some people to Malaysia through the channel. Sensing presence of the law enforcers, the human traffickers started firing at the police forces  where police force were compelling to retaliate leaving three traffickers dead on spot, the officer added.

Dhalu, Jafar and Jahangir were caught in the line of fire and sustained bullet injuries, were taken to Teknaf Upazila Health Complex where doctors declared them dead, said a staff of health complex. “They are underway to the Cox’s Bazar Sadar Hospital for autopsy.”

Four policemen were injured during the gunfight were given primary medical aid at Teknaf Upazila Health Complex.

“The three are the most notorious human traffickers to have been operating along the Bangladesh-Burma border for years and had died after being shot during an anti-trafficking raid in the southern coastal town of Teknaf in the Cox`s Bazar district, close to the border with Myanmar,” Rahman said to the reporter.

Dholu Hossain, had been responsible for smuggling more than 1,000 Bangladeshis, “many of whom are now believed to have died in the sea or of starvation. He used to send 50 people, mostly poor locals, per shipment in locally made wooden fishing trawlers, taking Taka 20,000 ($255) from each person,” said Rahman, adding that Dholu had been arrested several times but released on bail.