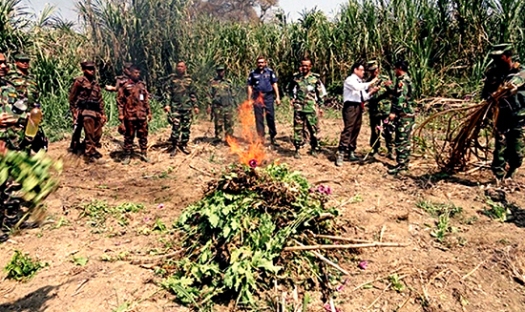 Joint force destroyed the poppy plan in Bandarban, Bangladesh.
“They cut down the poppy plants on about 2.5 acres of land and later burnt down.”

Lt Col Mizanur Rahman, the Commander of Alikadom Zone of the army, led the drive.

“The cultivation of the harmful plants in the district is rapidly decreasing. Every year joint forces launch operations to destroy poppy fields.  The army destroyed 59 poppy gardens in the area in 2014,” said Brig Gen Naquib Ahmed Chowdhury.

People living in the borders areas of Bangladesh, Burma and India have been cultivating poppy with the support of cross-border syndicates for the last 13 years, as it brings higher profits than other crops grown on their hard-to-reach land, locals said