Prior to the APEC CEO Summit, Beijing of China, Bangladesh President Abdul Hamid urged Burma President Thein Sein to work together to find out effective mechanisms for a permanent solution to the long-pending Rohingya issue at Diaoyutai State Guest House on November 9, according to president’s press secretary briefed reporters after the meeting. 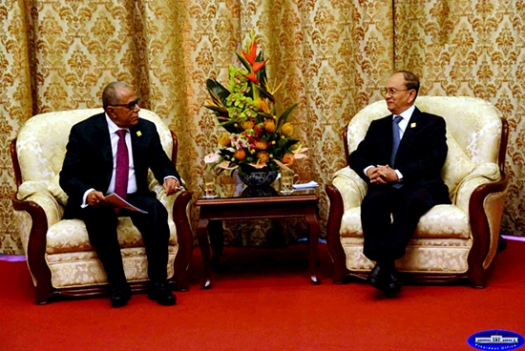 “The continued influx of Myanmar refugees to Bangladesh and drug trafficking at the border are affecting law and order as well as socio-economic problems in Bangladesh’s bordering districts of Cox’s Bazar and Banbarban. Both countries should work together to find out fruitful mechanisms for resolving the problem,” the President Hamid said this at a bilateral meeting with Burma President Thein Sein held at Diaoyutai State Guest House.

Hamid’s press secretary Ihsanul Karim told reporters after the meeting that the Burmese side took note of it for further necessary action.

The Burmese president was apprised of the serious problem being faced by Bangladesh in frontier areas due to huge influx of Burmese citizens since 1991-92. At the meeting, the Burmese government was requested for early repatriation of their citizens inside Bangladesh by expediting the process of verification.

During the meet, Thein Sein said the problems between the two countries could be resolved in a peaceful manner.

Bangladesh has more than 200,000 Rohingyas besides the 30,000 registered at Kutupalang and Naya Parha refugee camps at Cox’s Bazar, according to the UNHCR and Refugee Relief and Rehabilitation Commission in Bangladesh.

The government assumes a further 500,000 Rohingyas are living in the country.

“The Myanmar president has been briefed on these two issues Bangladesh has been facing. Myanmar has been urged to take back its citizens as soon as possible,” said press secretary Ihsanul Karim.

Rohingya Muslims facing persecution at home have been crossing over to Bangladesh for two decades now. Burma has not responded to Dhaka’s calls to take them back.

But, in Burmese president office website sated the infiltration of people who are assumed to be from Myanmar into Bangladesh, President U Thein Sein reaffirmed Myanmar’s stance that they must return on their own volition and come under a four-point scrutiny as agreed by both countries.