Maungdaw, Arakan State: Four villagers including an 11- year old boy arrested by Burmese Border Guard Police (BGP) in Maungdaw north on October 13, at night without any reason, said Kasim (not real name) from the locality.   “The arrestees are identified as —Hashim Ullah (19), son of Abdul Khader; Mohamed Alam (30), son of Mohamed Rashid; and Farooq (22), son of Mohamed Rashid and a minor boy Sayed Alam (11), son of Khalu. They all belong to Kwan Thipin village of Maungdaw Township.”

After arrest, they were brought to BGP headquarters of Kyikan Pyin ( Kawar Bill) village of Maungdaw Township where they are detained and interrogated with  severe torture. They were accused that they had link with Rohingya Solidarity Organization (RSO) a rebellion group, said one of the relatives of the victims who denied to be named.

The authority targets the Rohingya youths even the minor boy. They are innocent villagers, but the concerned authority deliberately accused them that they had connection with RSO without any proof or getting any document. The authority are trying to show their power or threaten to the villagers who did not participate so-called population data collection or census, according to Anwer, a local youth from the areas.

However, the arrested boy Sayed Alam was released on October 14, after giving grantee to the BGP personnel by his parents and the village elders accompanied by village administration officer, said  Jamil (not real name) another close relative of the victim who denied to be named.

“I was severely tortured by BGP personnel to get confessional statement regarding the said three arrestees that they had link with RSO or not,” said Asief, a school teacher who referred the boy, Syed Alam as he told.

At the same day, seven villagers were also arrested from Khadir Bill ( Ngyaung Chaung) village by BGP personnel. They were also transferred to BGP Headquarters, said  Kasem, a village admin office member from Maungdaw. “More than 200 BGP personnel rounded up the village at night and arrested the villagers. It is new method which BGP recently using to arrest the Rohingyas villagers.”

The Thein Sein government wants all Rohingya to declare them “Bengali” and then try to prove they are qualified for citizenship by the standards of the 1982 citizenship law. Those who fail to meet the standards would be put into what Burma calls “a resettlement zone”, according to sources.

Kasem, a local trader from Maungdaw said, “It is a deliberate action against the Rohingya community to participate the upcoming census that will qualify whether he/she will be citizen or not, by the standards of the 1982 citizenship law.”

Arrest and torture for blaze in Maungdaw north 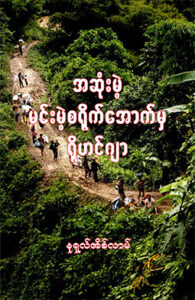