Chittagong, Bangladesh: The UN High Commissioner for Refugees (UNHCR) Chief in Dhaka Stina Lgungdell said in an interview to the daily star, a daily Bangladesh newspaper that the Rohingya refugee from Bangladesh need time to repatriate to their homeland. 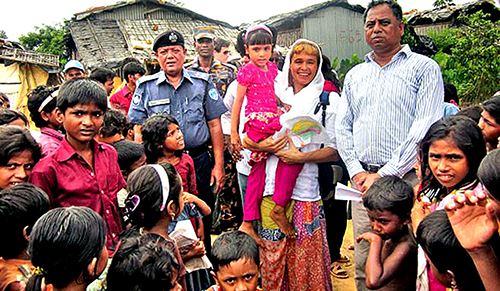 UNHCR cheif Stina Lgungdell  with refugee children  in Kutupalong registered camp“The situation in their home land does not look likely that their repatriation would be possible until the inter-communal violence in northern Rakhine State which occurred since 2012, has been resolved.”

“In view of the most recent report by the UN Special Rapporteur to Myanmar, UNHCR cannot support repatriation at this point in time. UNHCR repatriates people in safety and dignity in their home land.”

Bangladesh is not yet signatory to the 1951 Convention relating to Status of Refugees (CRSR) and we would encourage Bangladesh to consider signing this important piece of international law. We are also encouraging Bangladesh to adopt National Asylum legislation which would be suitable given the regional consideration. At present there is only the Foreigner’s Act, which stipulates that any illegal entry into Bangladesh is a criminal offence, irrespective of the reason behind the entry, even if a person is fleeing persecution, the Dhaka UNHCR chief said.

A refugee is a person who flees his/her country as a result of a well-founded fear of persecution based on race, religion, nationality, affiliation with social groups or political opinion. People have moved across borders for centuries and they continue to do so. I cannot make a statement on what makes all people move. However, given the Human Right Reports being circulated about the current situation of Rohingyas in Myanmar, one can now presume that many of them may have a well-founded fear of persecution should they return to Myanmar. Here also the Bangladesh government is referring to the unregistered Rohingya as “undocumented Myanmar nationals.” Myanmar does not recognize Rohingya as citizen and refers to them as “Bengalis.” The misfortune of the Rohingya is therefore that they are stateless. They are desperate for a place to call home, the chief said.

“UNHCR works in tandem with the government to provide the refugees with food, shelter, primary education and healthcare for registered refugee in Bangladesh.”

“The unregistered Rohingyas are a marginalized community who must nevertheless survive. This population is struggling on a daily basis to meet the basic needs of their children.”

The UNHCR chief said, “I would not be too surprised if some were involved in activities – drug trafficking and lawlessness- in which they should not be involved, and although this can never be justified, it can be explained by the fact that they are often left with no other choice. It should however be noted that most of the unregistered Rohingya have none or very limited level of education and they are therefore mostly used as “mules.” Before rushing to condemning them, we must ask ourselves, what would we do if our children were living on the verge of starvation?”