Chittagong, Bangladesh: Speaking at the London Conference on “Decades of Persecution and Destruction of Myanmar’s Rohingya” held on 28 April in London School of Economics, Nurul Islam, Chairman of the Arakan Rohingya National Organization (ARNO) called on the international community to “protect the defenseless Rohingya”. 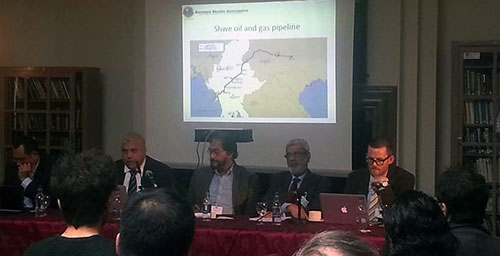 “Rohingya have been subjected to institutionalized persecution, severe restrictions on their on their freedom of worship, movement, marriage, education, deprivation of citizenship , summery execution and mass murder, rape, razing houses and destruction of villages, forced eviction, torture, disappearance, arbitrary detention, looting, extortion, forced labour, forced relocation, and food insecurity…Round the clock the Rohingya are in danger and are left with no option but to escape from their home land, or face physical destruction”, Nurul Islam said.

Thein Sein government has full responsibility to ensure security and rule of law, but it is unwilling to protect Rohingya people. The central and the Rakhine state administrations are guilty of practicing an apartheid policy and committing crimes against humanity, ethnic cleansing and genocide of Rohingya, Nurul Islam pointed out at the conference.

“There are  several  independent  investigations that confirm  that   crimes against  humanity  and ethnic cleansing   have been committed and has been  still ongoing against the Rohingyas  by  the government in Burma  along with   all other  racist  elements ranging  from   locals  to state premier, state party members , from  police officer  to high  commissioner, from local civilian   to celebrity , from  the opposition  to the  current government  including  the president. Thus these international crimes have been carried out with full impunity and with the knowledge of the government; and violations have not been fully and impartially investigated and none of the perpetrators have been brought to justice.”

Rakhine Buddhist extremists attacked everyone helping the Rohingyas. And all UN humanitarian agencies, INGOs and NGOs, including MSF, were forced to halt operations in Arakan creating serious humanitarian disaster, with report of helpless Rohingya dying every day due to hunger and diseases.

Very soon the whole Rohingya people will be exterminated if the international community is not acting swiftly to intervene in Arakan to protect the defenseless and ‘dying alive’ Rohingya people, on ground of humanitarianism, on the principle of ‘Responsibility to Protect’ (R2P). In the absence of national protection or domestic protection, it is imperative for the international community to act decisively.

Due to large-scale persecution, out of more than 3 million Rohingya population, about 1.6 million are in Diaspora. Bangladesh, Pakistan, India, Saudi Arabia, UAE, Thailand, and Malaysia are the major places where the Rohingya escaped for their lives. Generally they are vulnerable in those countries without status.

Denied citizenship in Burma, unwanted in neighboring Bangladesh and elsewhere, under extreme condition, Rohingyas became desperate to risk death on the sea since 2008. On their voyages towards Malaysia and other destinations, many had drowned and scores of others were detained or rescued in countries within the region. A large number of them were victimized at the hands the greedy exploiters, human traffickers and smugglers.

From June 2012, an estimated 3000 to 5000 people were killed, drowned and missing. Many hundreds of women were raped.  Large settlements with many thousands of homes, including mosques and madrassas, were devastated. At least 1600 innocent people were arrested on false charges. 150,000 people were displaced forcing them to live in permanent segregation in apartheid style overcrowded IDP camps away from their towns, homes and villages where no education, adequate food, water, healthcare and sanitation available. A discriminatory and outrageous two-child policy has been imposed and more than 50,000 children were blacklisted in violation of its treaty obligation under UN Convention on the Rights of Child 1989. The racial hatred and Islamophobia is spreading like a cancer all across Burma. Violence and silence extermination of Rohingya is still continuing.

The Burma Citizenship Law of 1982, which violates several fundamental principles of customary international law, has deprived them of citizenship rendering them stateless in their own homeland.

The imposition of measures to prevent birth within ethnic Rohingyas, their expulsion from their homeland, and systematic deprivation of all their fundamental human rights and freedoms, including their Burmese citizenship, while subjecting them to institutionalized persecution and forcing them to live in subhuman condition, both inside and outside the country indicate the regime’s intent to wipe out this minority community from Arakan.

Based on the circumstances of the crimes against humanity and ethnic cleansing against Rohingya with a few  factual events mentioned above, and drawing on UN Genocide Convention of 1948, came into force in 1951, it is a case of  genocide but carrying out slowly possibly to evade international condemnation and prosecution.

According to Professor Gregory H. Stanton, President of Genocide Watch “the Rohingya people are victims of the eight stages of genocide — Classification, Symbolization, Dehumanization, Organization, Polarization, Preparation, Extermination and Denial.”

Speaking at the conference via skype, the United Nations Special Rapporteur for Human Rights, TomásOjéa Quintana said “There are elements of genocide in Rakhine with respect to Rohingya. It is crimes against humanity. The possibility of a genocide needs to be discussed. This conference is very important as it does just that.”

The Rohingyas are pleading from this platform to the international community to put an end to this barbarism and let the world body STAND for “NO MORE TO GENOCIDE” and prove that nations of the world can really STOP mass killing and atrocity, said Nurul Islam at the conference.