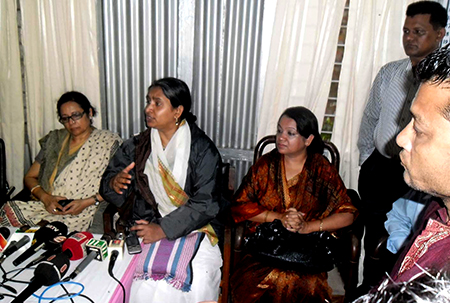 Dr.Dipu Moni expressing reporters in Kutupalong refugee camp
The team visited the Kutupalong official refugee camps in Cox’s Bazar on August 17 and assessed the living conditions, health, and education of the refugees.

“The delegates examined the sheds and had some interviews with the refugees about their living condition, health, and education, and also asked them if they are willing to go back to Burma,” said another refugee named Kala Meah from the refugees.

“The team also visited the women’s center, computer center and refugee clinic and held a meeting with the camp authority and discussed different issues of the camp.”

We will go back to Burma if we are recognized as citizens of Burma like other ethnic groups,” said Jalal, Ex-Chairman of Camp Management Committee.

The Rohingya will be sent back to Burma as early as possible. Our government is working with Burmese government regarding the issue of Rohingya, Dr. Dipo Moni said.

“The government is keeping strict vigilance as the Rohingyas would get their right to citizenship in Burma,” she told the reporters after visiting the Kutupalong Refugee Camp of  Ukhiya under the  Cox’s Bazar district.

The foreign Minister said Bangladesh is a densely populated country, is facing enormous problems with the excessive Rohingya refugees. “We have finalized to send them back to their homeland through discussion with Myanmar authority but could not do so due to riot there,”Dipu Moni categorically said.

“We have already urged Burma (Myanmar) about safe return of Rohingyas so that they could come back to their homeland voluntarily with their rights and dignity,” she said.

However, Dipu Moni led a three-member delegation during her visit to the costal district camp where hundreds of Rohingya refugees took shelter to avoid persecution in Burma. Chairman of the Parliamentary Standing Committee on the Ministry of Foreign Affairs Nilufar Jafar Ullah and Nazma Akthar accompanied her during the visit.

The team visited the official Kutupalong camp at about 1:00 pm and left at about 2:30 pm.