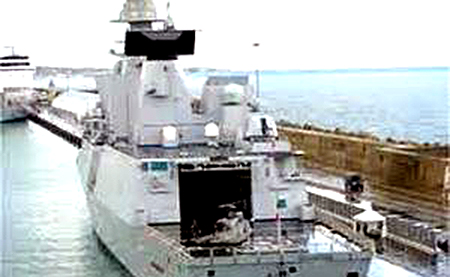 Burmese warship 554 stationed at Poung Zarr (Ashika para), Maungdaw
Three Burmese naval force frigate installed in the Naaf River along the Bangladesh-Burma border will be there for nearly one month. It is there to oversee a smooth to move of Nasaka, the previous Burma border security force (Nasaka), with ‘Armed battalion police’ (ABP), BGB sources claimed.

Lt. Colonel Jahid Hassan, Commanding Officer of 42- BGB Battalion Teknaf had protested the deployment, but later learnt that Burma authority had already sent message to Chittagong about the frigate, the Commander said

“However, Bangladesh navy and Coast Guard patrolling around the Saint Martin’s Island and  border areas and also BGB stationed in Teknaf are monitoring the situation,” Colonel Jahid said.

Officials of Border Guard Bangladesh however denied any tension on the border leading to the deployment of the Burmese navy warship 554.

“The warships were sent for border protection duties for an interim period before a new force is deployed on the border.”

The ship  554 was now at Poung Zarr (Ashika para),and other two ships were at Alay than Kyaw and Kyauk pundhu ( Sitar Pawrika) since July 13.

“The force is under the Command of one Colonel, stationed at former Nasaka headquartered, Kawar Bill village of Maungdaw north.”

Former Nasaka force carried out their duty along the Burma-Bangladesh border since1993 and earned bad names of —kidnapping, torturing and killing— Bangladeshi fishermen, BGB sources.

Burma made the re-deployment of the new border security force along its frontiers on July 15. The new troops are deployed as the President of Burma abolished Nasaka forces on July 12, through a state order.