Kuala lumpur, Malaysia: The Perdana Global Peace Foundation (PGPF) is deeply concerned with reports of what is described as a “human catastrophe of indescribable proportion” in relation to the aggression on the Rohingya, felt the urgent need to hold this conference to address the issue and propose solutions to it, said  Tun Dr. Mahathir Mohamad, the fourth Prime Minister of Malaysia and President of PGPF. 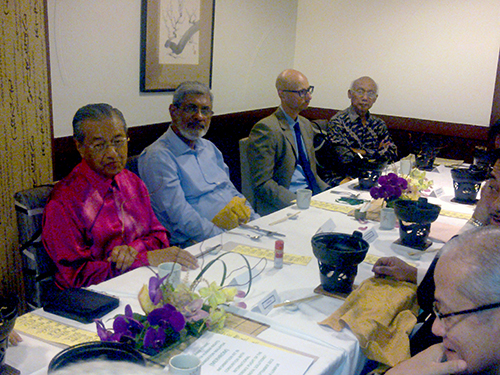 The delegations with  PGPE members in the dinner party

The PGPF, very much like other civil society movements and humanitarian bodies, is deeply troubled with the recent developments in Rakhine and current reports from international agencies indicate that the crisis is showing no signs of dissipating, but instead intensifying.

“We strongly condemn these continuing acts of violence, rapes, beatings, burning of dwellings, killings and other inhumane acts perpetrated on the Rohingya,” said one of the   PGPF members

“Since the United Nations itself has recognized the Rohingyas as being one of the most persecuted minorities in the world today, we cannot sit on the sidelines and allow these acts which are tantamount to ethnic cleansing be allowed to persist without undertaking efforts to oppose and put a stop to them.”

Adhering to the spirit and understanding of peace between member countries must be maintained vis-a-vis the ASEAN Charter; PGPF has organized this International Conference: “Plight of the Rohingya: Solutions?” at the Islamic Arts Museum Malaysia on September 18, for an insight on the crisis.
.
YABhg. Tun Dr. Mahathir Mohamad, the fourth Prime Minister of Malaysia and President of PGPF, delivered the Keynote Speech in the international conference.

The Conference is attended by participants comprising representatives from the diplomatic corps, international organizations, parliamentarians, human rights groups, academia, civil society movements, non-governmental organizations, members of the media, as well as Rohingya leaders ( AFK Jilani, Dr. Mohamed Yunus, Dr. Mohamed Ali (aka) Dr Than Aung  and Dr. Wakar Waddin) of Rohingya organizations who are based in countries outside Burma, said a Rohingya from Malaysia.

“It is indeed a collective and united call to action as part from calling upon the Myanmar authorities to acknowledge and resolve the crisis, UN and international agencies could very well play their part in ensuring their “responsibility to protect”, said Norian Mai, Chairman of Perdana Global Peace Foundation in his closing remarks.

Delegations on the stage to delivery their speeches

At the end of the one-day international conference on the “Plight of the Rohingya: Solutions?”,   the participants unanimously passed 16- point resolution, including a call for Aung San Suu Kyi and other political parties in Burma to promote ethnic  and  human rights and equality.

The resolutions stated Suu Kyi and the National League for Democracy Party should take an unequivocal and proactive role in ending the plight of the Rohingya presented by Tan Sri Ahmad Fuzi Abdul RazakThe resolutions also called on the Myanmar government to recognize the legitimate rights of the Rohingya to live in peace and move freely within the country.

“We call on the government of Myanmar to create conditions for the safe and voluntary return of displaced Rohingya to their homes or alternative locations of their choosing without persecution or discrimination,” said Ahmad Fuzi, who is Ambassador-at-Large from the Foreign Affairs ministry.

He said the Rohingya deserved the rights to shelter, food, water, health care, education and basic sanitation according to international human rights law, norms and standards.

Participants of the conference also roundly condemned the continuing acts of violence, rape, beatings, burning of dwellings, killings and forced disappearances of the Rohingya and urged the Myanmar government to amend its 1982 Citizenship Act to grant citizenship to the people.

Another adopted resolution reminded the Myanmar government that its failure to resolve the Rohingya problem would undermine its current reform and progress towards national reconciliation, democracy and prosperity.

Asean was urged to play a more active, substantive and effective role in resolving the ethnic minority’s problem in the interest of regional peace and stability.

Conference participants agreed that the United Nations should facilitate the establishment of a “cordon sanitaire” (sanitary cordon) to provide internally displaced Rohingya a safe and humane environment pending the attainment of a political solution.

“We cannot guarantee that all the resolutions will be fulfilled, but we have to try and push them to the heads of states and people with authority.”

“The United States is fond of applying pressure on other nations by utilizing economic sanctions and this is a situation in which it could be used,” said the honorary president of the Perdana Leadership Foundation.

However, he cautioned that this, too, could become a problem. “It could tempt others to come here. As it is now, we also have refugees from Laos and Cambodia.

“If people see this country as a good place to go, they will all come here and it may result in our own people not being able to get jobs.”